You can trust me Judy.

"Rebel Without a Cause”, Nicholas Ray, 1955. pic.twitter.com/C0y3oqFPIU

Sandwiched between two radical novels The Catcher in the Rye (1951) and On the Road (1957) that focus on challenging contemporary ideals. Rebel Without a Cause epitomized the adolescent angst through refuting the conservative social constructs of middle class America during the 50’s.

Costume designer Moss Mabry fashioned Jim Stark’s (James Dean) iconic look as a symbol of individuality which quickly spiked across America as teenagers were given a wire frame wardrobe by which to emulate their hero.

Mabry’s choice of red windbreaker bomber style jacket alongside Stark’s black 1949 Mercury gives the audience a sense of danger when faced with the protagonist. Denim was popularised as high-profile actors embraced the idea of dressing down to impress. 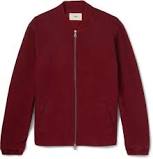 The nonchalant and melancholic attitudes of adolescent America emerged and expression through fashion gained momentum, escaping from the transition of boy to man through dressing like their fathers.

Rebel Without a Cause is synonymous with the rejection of outdated values and keeping with tradition but it is much more than that. It is the embodiment of individuality, of embracing the yearning to forge ones own path and of having a wardrobe that allows for self-expression.

2 thoughts on “Rebel with a Cause”

This is a text widget. The Text Widget allows you to add text or HTML to your sidebar. You can use a text widget to display text, links, images, HTML, or a combination of these. Edit them in the Widget section of the Customizer.